I love Peru. I love the coastal desert that stretches all the way to the border with Chile, with its patches of red, green and ocher that reflect the ore underground. I love the higher altitude Altiplano where rock hard grass grows and iron-teethed alpacas and llamas graze. I love the warmth and the passionate spirit of the people, and admire the resilience of the Quechua Indians in the harsh Andean environment.

I spent the last two days around the Colca canyon, a four hour drive from the nearest city of Arequipa that crosses a pass 15,700 feet high – Mont Blanc, the highest peak in Europe, is 15,771 feet high in comparison. At the top of the pass I encountered snow storms, as well as little piles of stones which are the offerings that the Quechua Indians make to the Pachamama, the Mother Earth. Then at Cruz del Cóndor I saw –  no points for guessing – condors. I had to wait for half an hour to see one and then found it disappointingly ugly. With its black plummage and bald, wrinkly head it looked like a character from a horror movie, perhaps appropriately for a scavenger of dead animals. It was also impressively large, with a ten-foot wingspan. The previous night I had heard a Peruvian band auspiciously sing “El Cóndor Pasa”. 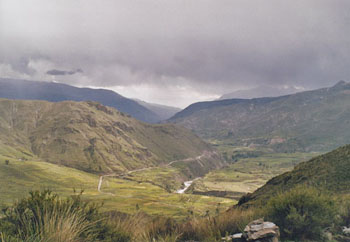 I do not exactly blend in with the locals with my pale skin and blue eyes, so everyone asks me where I come from. When I say France, the children automatically reply “Capital Paris, President Nicolas Sarkozy”. I suspect few Westerners know Alan García is president of Peru, or that its capital is Lima even. People also ask my name but then decide they would rather call me Chavela, the Peruvian nickname for Isabelle.

I have been staying in rather colorful accommodation. My hotel in Lima was a quaint old colonial building, complete with a crazy cat, three babbling parrots, an old tortoise and a show cabinet in the reception area filled with pre-columbian ceramics and three mummy skulls. I saw more mummies in the Chauchilla cemetery near Nazca, and in Arequipa, the museum’s most famous display is Juanita, the best preserved Inca mummy in South America. But by then I felt I had seen enough dead bodies and simply looked at her on the postcards that can be found everywhere in the street stores. My hotel in the Nazca desert had a lovely little patio, so if you are reading this at work, just imagine me lazing in a hammock, shaded from the South American sun by a couple of palm trees, and a glass of chilled pineapple juice in my hand.