I arrived in Bolivia later than planned. The bus left Cusco at 9am and by noon we reached a small village where the main road had been blocked by a makeshift barricade of large stones. We were informed that we would have to wait in the village until later in the day to resume our journey, due to a country-wide indigenous farmers’ strike in protest against a rise in the cost of electricity. The Quechua Indian farmers in the region are extremely poor, barely making any profits on the sale of their potatoes, and any increase in their overhead hurts them badly.

My sympathy vanished when the farmers began to pelt the bus in front of us with stones. I discussed this with a Peruvian man on the bus who opined that the farmers are uneducated, and are used to resolve conflicts with a punch on the nose. That has not been my experience so far, in fact whenever I have met Quechua Indians I have found them to be very kind, shy and soft spoken. It is true that tempers flare up easily in this part of the world but I suspect that those violent acts mostly reflect the farmers’ desperation born out of extreme poverty and discrimination. 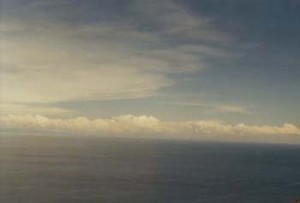 Eventually the bus made it to Puno, on the Peruvian side of lake Titicaca. This was as far as we could go for the next three days as the unrest further ahead turned violent. Five people are reported to have died in the fighting. So I spent the night in Puno and headed for the harbor at 7am the following day, and caught a local boat to Taquile island, 15 miles off the coast of Lake Titicaca.

There are no hotels on Taquile so I stayed with a local family. All houses on the island are made of mud bricks, and lack a bathroom, running water and electricity. The five year old son of the family gave me a running commentary of the property and when he was not sure of a word in Spanish, he simply switched back to Quechua. He informed me that my room had ratones – mice – still better than ratas (rats) I suppose. At night, the candle lit dinner could have passed for romantic had I not been sitting on a straw filled mattress with the ratones as sole companions. There is little to do or see in Taquile so I made it back to Puno after two days, in the hope of resuming my journey. I splurged on a $7 room with private bathroom and the promise of 24 hour hot water.

I arrived on the Bolivian side of Lake Titicaca after a spectacular drive along the shore lined by straw-colored reeds and azure sky reflecting itself in the water. I spent the night in a little beach resort. This is the original Copacabana, which gave its name to the legendary beach in Rio de Janeiro. This cute little place is famous because its white-washed basilica is the seat of the Virgen de Copacabana, the saint patron of Bolivia. I do not look Bolivian any more than I looked Peruvian however, and several peasants asked if I come from Brazil, apparently the most logical explanation for my blue eyes and funny accent. I have heard all sorts of theories on my origins but this a new one.