My husband complains about the street light outside our Washington DC home. “It’s obnoxious” he says, as the orange glow penetrates through our living room window at night while he tries to watch television. Personally, I believe that it makes our house safer. I don’t like the thought of a gun-wielding criminal breaking in, so I prefer to imagine that burglars would choose a poorly-lit house over ours. 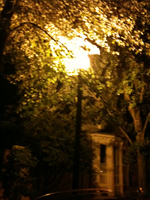 When I visited Warsaw, the Polish capital, I marveled at the street that was still equipped with gas lights, and required someone to switch those lights on at dusk and off at dawn. It was like stepping back to the early twentieth century. Indeed, until recently electric street lighting was a given in the West. At least until the great recession hit local government budgets throughout the United States, leading to cutbacks in the number of street lights in some areas, despite concerned residents pointing to a rise in crime.

In Lhasa, the Chinese-ruled capital of Tibet, there is ample street lighting in the Han Chinese districts. On the other hand, the Tibetan district that lies right in the middle of the city did not have a single outdoor light-bulb when I visited. I imagined the Chinese authorities would have been more subtle about it. In a part of the world where face is everything, it did not put them in very good light, if you will pardon the pun.

The truth is, it took me some time to notice the absence of public light in Tibetan Lhasa, even though I walked through the streets almost every night with my Tibetan friends. My eyes quickly got accustomed to darkness and the moonlight was enough to navigate.

After all, Mankind managed to survive for a few centuries before the invention of street lights. When I tried to cross the Tibetan plateau during the rain season and our bus got stuck in mud during the night, the absence of outdoor lights combined with the high altitude at 13,000 feet meant that the sky was clearer and the stars brighter than anything I had every seen. There were so many of them that I got easily distracted from the predicament that we were in.

No wonder that observatories built in the West over a hundred years ago, such as those of Paris or Edinburgh, complain that light pollution from the city prevents them from being able to observe the sky, and turns them into museums.

So are street lights a good or a bad thing?

It depends on your perspective.