My horse is galloping across the pampa at full speed. All I did was gently press my legs against her body and open my fingers on the reins. I had told the gauchos I could ride, so they threw a saddle on her back and brought her to me. She only goes out with experienced riders, every few days, so she’s not short of energy. In sharp contrast, Mike’s mare is walking with her head low, a few hundred yards behind us now. He would be hard pressed to persuade her to trot, let alone canter.

La Bamba was built in 1830, during colonial times, one of the oldest estancias in Argentina. It features a watchtower, typical of the pre-1880’s, which is painted bull-blood red–sangre de toro–like the rest of the buildings. Under the shelter of the gallery, a leather couch with wrought-iron armrests oozes Spanish colonial comfort.

Crisps white table linens were thrown over the dining table, itself placed on the lawn. Alfresco dining heralds mild weather, as does the orange tree, its fruits too tempting for Mike to resist. In the lounge at night, the crackling logs in the fireplace and woolen mantas on the floor provide a feeling of cosiness. 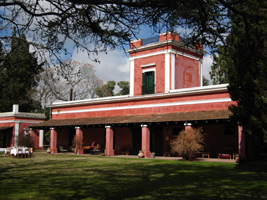 La Bamba’s owner still raises cattle and employs gauchos–Argentinian cowboys–to look after the beasts. Brujita, the black mare that I am riding during our sojourn, has her mane shaved, like all gaucho horses. She is a Criollo, an Argentinian breed whose Andalusian ancestors first stepped off Spanish galleons in the mid-sixteenth century. Some of the horses were later freed in the plains of Argentina. Their wild descendents became well adapted to the variations in temperature and dry grasses of the Pampas.

They were not the only ones to roam free: nomadic riders, also of Spanish ancestry, lived by hunting wild cattle. Commercial cattle ranching began in the second half of the 18th century and the gauchos settled in estancias. Their reputation for being proud, freedom loving, and quick with their knife is the stuff of legend, but today we are thankfully merely trading horse stories.