Our flight is already almost an hour late and still no sign of the aircraft. I am pacing through Montevideo’s airport. I know this is South America but I had hoped they would make an effort for an international flight. At last, our Aerolíneas Argentinas flight to Buenos Aires is boarding, and 30 minutes after taking off, we land in Argentina at 10pm.

My husband and I still have to collect our luggage, get a taxi into town and check in to the hotel before a well earned rest. It is a short night in the Argentine capital before heading back to the airport to catch an early morning flight to El Calafate.

The flight departs one hour late but today I feel in less of a hurry. It is only a three hour flight to El Calafate, which leaves us all afternoon to check into our hotel and leisurely stroll around town before dinner at a local Parilla. I nibble on the club sandwich, identical to the one served on yesterday’s flight, and sip tea from the Aerolíneas sky blue plastic cup. We start our descent half an hour before reaching the airport and soon snow is flying past the window outside.

Suddenly, the engines roar and the pilot announces in Spanish that the airport has been shut down due to a snow storm and that we have been re-routed. Half an hour later we land on the Atlantic coast instead of the heart of the Andes. “Welcome to Rio Gallegos” the cabin crew announce, this time in both Spanish and English.

We disembark into the tiny airport hall and I explain to four bewildered Anglo-Saxon tourists that they did not accidentally board the wrong plane in Buenos Aires. The ground staff tell me that indeed there is a road to El Calafate, but it is unpaved and it would take eight hours by bus to reach our original destination. They recommend that we wait for further instructions from the airline.

After several hours, we are told to get back on board the plane. The pilot cheerfully breaks the news that we were supplied with snacks that will be served while we wait for the all clear. Soon, we will be taking off for a fresh attempt at landing in El Calafate. I munch on my third identical Aerolíneas club sandwich in less than twenty four hour while a man climbs a step ladder outside the window. He proceeds to sweep the wing with a brush and then manually sprays it with de-icing liquid from a large bottle strapped to his back.

Half an hour later, we get permission to take off. It is all loud cheers in the cabin as we climb into the night. My watch shows that twenty minutes have passed since we left Rio Gallegos and I am beginning to worry. I anxiously listen to the roar of the engines which are clearly still in full thrust; the nose of the plane is firmly pointing towards the sky. Finally, the pilot breaks the news: the airport in El Calafate is still closed. This time we are making our way back to Buenos Aires.

The latest news causes an uproar. All passengers jump to their feet shouting in Spanish”It’s a lie! They lied to us!” and then congregate in the aisle. They spend the remainder of the three hour journey standing, locked in a passionate discussion over the nature and intricacies of Aerolíneas’ perfidy. The cabin crew, the four Anglo-Saxon tourists, Mike and myself are the only ones sitting as we land in Buenos Aires.

Have we been here before?

The cabin crew open the door but no-one budges. After five minutes I ask a young steward for an update on the situation. It turns out that Aerolíneas is offering to put us up in a hotel for the night and to charter an extra flight to take us back to El Calafate the next morning. It all seems reasonable to me, in fact I would not have expected any less, so why is no-one disembarking?

The steward casually explains that the passengers are up in arms against Aerolíneas and have decided to keep the plane hostage. And what should Mike and I do? He shrugs his shoulders “It is entirely up to you, you can take the voucher or else stay on the plane” And what is the steward going to do? He has to stay until everyone is gone, but that does not seem to phase him, so perhaps this is nothing unusual. Mike and I make our way out of the plane and pick up our voucher at the customer service counter. 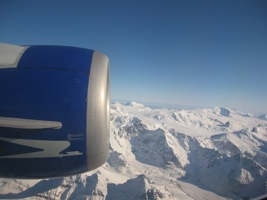 The following morning we board a new plane. I look around and I recognize our fellow passengers from yesterday, who seem in good spirits on this fine day. We leave Buenos Aires an hour late but I no longer pay attention to that kind of detail. This time we make it to El Calafate after an uneventful flight, including another Aerolíneas special club sandwich and a cup of tea in a sky blue plastic cup. I pick up my bag and we wait for an hour for Mike’s suitcase to show up but all in vain. It did not make it. The ground crew gives us a receipt and informs us that Mike’s luggage will be delivered to our hotel as soon as the next flight from Buenos Aires brings it.

Regrettably, after a delightful three days exploring the spectacular glaciers that abound in this enchanting region of Patagonia, it is time to move on. I think the flight to Ushuaia was one hour and a half late, but I could not say for sure, I hardly noticed. In Ushuaia we spend the next few days sailing the Beagle Channel, driving off-road around Lake Fagnano in a Land Rover and dog sledding atop snow-covered peat-bogs. Finally, it is time to get back to Buenos Aires. The taxi drops us off at the airport but as we check-in for our 1pm flight, we are told to come back later as our flight has been delayed until 5pm. We gleefully seize this unexpected opportunity to enjoy more of Ushuaia and hop into another taxi and back into town.

It has been five days since we made it back to Buenos Aires, which we spent exploring this wonderful city and the surrounding Pampa. Our United flight pushes back from the airport terminal bang on time; half an hour after take off, the cabin crew start serving drinks. For old time’s sake, Mike and I produce two little sky blue plastic cups, stamped with the Aerolíneas logo.

Tea for us please.